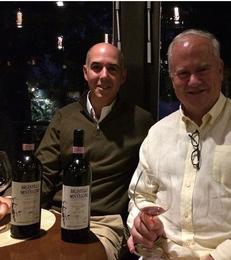 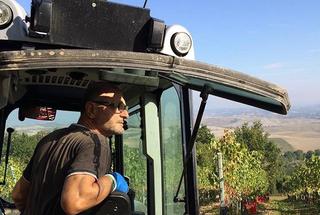 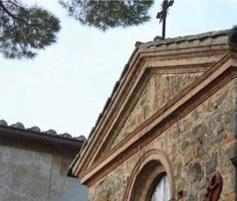 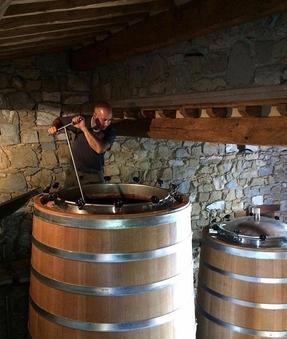 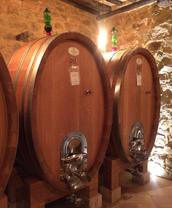 Cerbaiona is a manor house dating from the 1600s, with a small private chapel and a renaissance garden supported by a high embankment. From this location at 400 meters above sea level, just northeast of the town of Montalcino, the view looks towards Pienza, and tucked off to the south, hovers Monte Amiata. The towering Maremma cypress and intimate villa of Cerbaiona are a landmark travelers see as they head to Montalcino from Torrenieri.

The wines are then transferred to Slavonian oaks casks - like the fermentation tanks, hand crafted by master coopers Klaus and Jacob Pauscha - ranging in size from 10HL, 17HL and 20HL. Minimal racking is used during the 30 months in cask.

Hands on, artisan winemaking starts with the separation of vineyard blocks and specific rows. Selection tables and a high tech, paddle destemmer ensure the best  berries are selected and kept in pristine condition. They are transferred, without any crushing, into open top, wood tanks, varying in size from 15HL, 25HL, and 30HL.

Fermentation is allowed to occur naturally with indigenous yeasts. For the first week of fermentation, to avoid over extraction and ensure more elegant wines, pump-overs are limited to an absolute minimum, while the caps are punched down manually. Press wine is kept separate from free run and the new wines undergo malolactic in the same, upright wood tanks used for fermentation. The wines  are then left on the fine lees, occasionally stirred, until spring.

Cerbaiona has defined this corner of the Montalcino for centuries, and long before there was an appellation “Brunello di Montalcino”, it was said: Il vino più buono viene da la Cerbaiona. Those were the first indications of a place particularly suited to growing Sangiovese; and the intimation of a cru vineyard.

Current vineyard planting at Cerbaiona consists of three main blocks planted in 1978, 1986 and 2000, with less than 3,600 plants per hectare.

Many vines are now missing and a progressive replanting program has been initiated to replant to higher density, with site specific clones selected from Guillaume nursery, a project that began with Paolo de Marchi nearly three decades ago, engaging in profound studies and clonal research on Sangiovese in Tuscany.

At the end of 2015, the new ownership converted Cerbaiona to organic farming.

​In 2017, an additional hectare and a half of Sangiovese is being planted on steepest part of the estate, directly below the villa of Cerbaiona - perhaps the most magnificent spot on this cru, but long planted to olives as a more expedient, lower labor use for this steep slope. ​

In 1977 a new owner, Diego Molinari, arrived from Rome, and neighboring growers were hired to replant and expand the vineyard. In 1981, Cerbaiona began to produce for commerce, and four years later labeled the wine from that vintage as Brunello di Montalcino.

Nearly instantly, critics noted what the locals had known long before: The small hillside of Cerbaiona, with its galestro (limestone shale) soils infused with sand, is a unique patch of land in Montalcino. Almost by doing nothing, you can make an exceptional wine at Cerbaiona. Its vineyard location is that special and unique.

In the several decades that followed, Cerbaiona took on the status of a cult Brunello, its small production difficult to find and the characteristics of this wine immediately identifiable with this particular vineyard site.

Indeed, Cerbaiona is distinctly different than other Brunello and has the inimitable, individual signs of a cru vineyard; a wine for which being from Cerbaiona is its very essence.

In the fall of 2015, Diego Molinari, age 84, sold Cerbaiona to a group of investors led by Gary  Rieschel, an American wine collector, and Matthew   Fioretti, the estate’s new manager who runs all aspects of Cerbaiona. Maurizio Bovini, with his decades of experience in vineyard and cellar management, joined Cerbaiona in April 2016. This group has brought together its passion for farming and wine in order to guide and move forward Cerbaiona.  ​